Diamonds From Difficulties Part 3: Diamonds In The Making 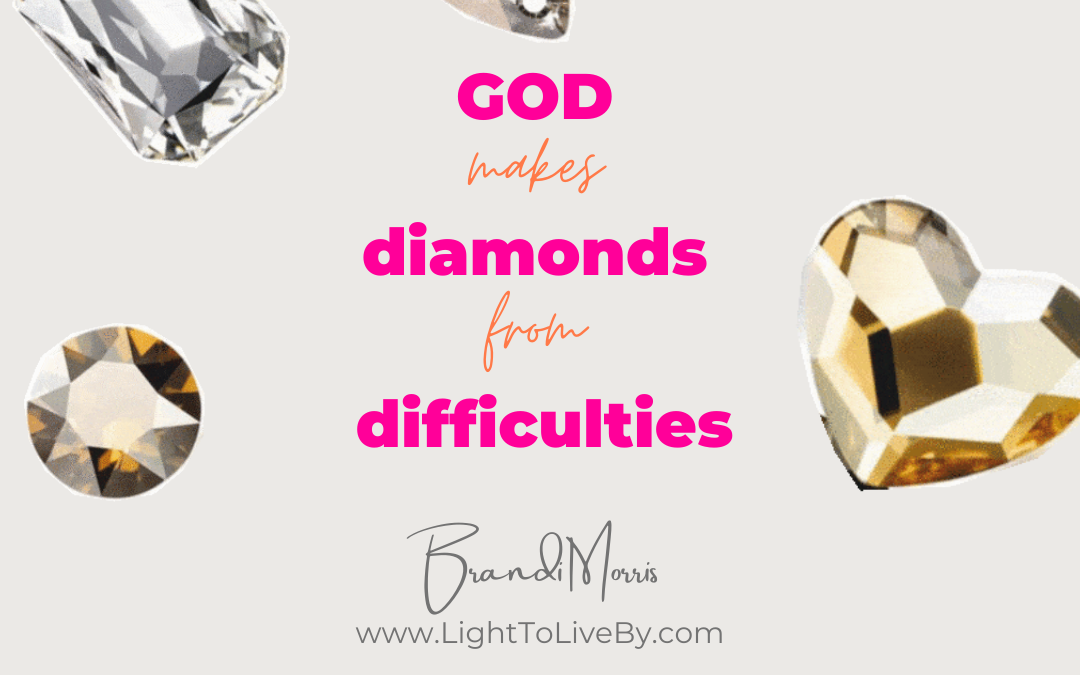 Hi Friends! We are nearing the end of our Diamonds from Difficulties series.  I hope you are enjoying it as much as I am.

Let’s get into today’s topic…

The formation of diamonds is dependent upon the right conditions.  These precious stones are formed deep beneath the earth’s surface in the harsh conditions of high heat and heavy pressure.  These are the only conditions that produce diamonds.

If you have found yourself in the diamond mine- in deep, dark, hot, and tight places being squeezed and pressured, that’s an indication that you are a diamond in the making.  These conditions are designed to make us something better than we were before.

One of my favorite people in the Bible is Deborah.  She was a wife, judge, and prophet, turned war hero (her story is found is Judges 4-5).  She, along with Barak, led the Israelite army in battle against Sisera and the Canaanite army.  God gave Deborah the battle strategy in great detail. But even still, this would be no easy battle.  Barak’s faith for the fight was questionable and the Israelite soldiers didn’t have shields or spears.  To make matters worse, the enemy’s armory included horses and iron chariots.  And if that wasn’t bad enough, Deborah, Barak, and the Israelites showed up at the time and place God told them, and it poured down rained until the river overflowed its banks.

When I study this story, I can’t help but ask God, “why?”   I mean, the situation was already dire and the battle was going to be hard enough.  A torrential downpour and a flood just seemed like unnecessary complications.

What God showed me was that He was creating the conditions for victory.  He sent the rain to help not to hinder.  Yes, the weather was an inconvenience to the Israelites army, but it was detrimental to the Canaanites. The rain made it impossible for the enemy to maneuver their sophisticated chariots and horses which were essential to their battle plan.  It was these “complications” that God used to secure the victory.

But friends, for me the problem is God’s condition don’t always seem conducive for victory.  In fact, many times they seem counterintuitive.  And when that happens, I have to remind myself that God doesn’t just use the good, He also uses the bad and the ugly to fulfill His purposes in me.  His ways are higher than mine and His thoughts are higher than my thoughts.  And the circumstances that I have tried to pray away, were very often the things God used to transform me and deepen my dependence on Him and His wisdom.  And that is what He considers victory.

Like diamond, graphite is a mineral made of pure carbon. The two minerals are chemically identical, but their structure and the way they function is very different.  If you’ve ever written with a pencil, you know that graphite is extremely soft and breaks with very little effort.  Diamond, on the other hand, is hard, scratch-resistant, and difficult to break.

So how can graphite and diamond be so alike in nature, yet so different in character?  Well, while their composition is the same, the conditions under which they are formed are not.  Graphite is formed in the earth’s crust, closer to the surface, where there is less pressure and lower temperatures.  But the right conditions for diamond formation only exist about 100 miles below the surface in the earth’s mantle, where the heat and pressure are extreme.

That’s right, diamonds are mantle minerals! Whatever your age or gender, you have a mantle- a calling you were created to carry out.  Mantles may seem glamorous, but they are heavy and come with much pressure and heat. So much so, that only those who have been properly formed can handle them. But rest assured, your mantle comes with all the grace you need to be victorious.

So are the rains and the floods that accompany your battle really necessary?  My only response to that question is, “It depends on what He’s making.”  My guess is that God is making diamonds, not graphite.  And diamonds aren’t made in the shallow end, they are made in the deep end.  So I invite you to dive in.

Friends, I want to leave you with this encouragement found in 2 Corinthians 4:7-9 NIV:

“But we have this treasure in jars of clay to show that this all-surpassing power is from God and not from us. We are hard pressed on every side, but not crushed; perplexed, but not in despair; persecuted, but not abandoned; struck down, but not destroyed.”

There is treasure within you waiting to be revealed.  From the extreme conditions will arise a beautifully formed mantle mineral.

Join me again next week.  I would love for you to become a Light Room Insider and get a first look at each post. Subscribe below and I’ll deliver them directly to your inbox.

Living In The Light,